On January 23, 2020 we received a reply by e-mail from the Genossenschaft Migros Zürich on behalf of Activ Fitness. Migros / Activ Fitness does not want to respond to our demands.

On Friday 24 January, our criticism was picked up by the Swiss online magazine persoenlich.com.

On behalf of its subsidiary ACTIV FITNESS, Migros expressed its lack of understanding for the action. The poster motive is a proposed solution for the Christmas pounds with “a wink”.

The devaluation and ridiculing of the fat body as motivation? That sounds like a bad version of “the end justifies the means” and the idea represented in the hate networks that #Fatshaming is needed to get fat people excited about sports.

In any case, this reaction does not reveal any of the values with which both companies advertise themselves: neither the respect promised in the mission statement of the fitness chain, nor the claim that “the focus is not on profit, but on people” of Migros.
Both would require #weightinclusive offers and #bodyrespect towards customers.

It’s that time of the year again: The fitness centers sound the charge on the fat rolls and outdo each other in the negative portrayal of the fat body. 1st place this time goes to ACTIV FITNESS, we think.

In the campaign “Weg mit der Weihnachtsdekoration!”, the gym chain depicts fat people as a Christmas ball. The head is deliberately avoided. What remains is a torso, which is staged as an impersonal mass. A popular form of dehumanized representation known as #headlessfatty.

The studio relies on #bodyhate as a motivation for membership, both in terms of one’s own body – feeling fat is enough – and the fat body in general. ACTIV FITNESS thus contributes to the stigmatisation of the fat body.

When I saw those advertisements, I was very shocked. I felt assaulted, as if someone was telling me “take that fatty, go to the gym, you need it”. I felt like screaming and crying at the same time, I felt humiliated. Because yes, I am fat, my body looks like that Christmas ornament that should be put in the closet. But I love my body and I think it’s beautiful the way it is, I’m fat and I’ve always been fat, it’s part of my identity!

Who is behind the campaign?

Who made the counter-campaign?

Within a short period of time, the campaign reached people in Switzerland, Germany, Austria and via French-speaking Switzerland to France.

The statements were provided by great people and translated by us – thank you very much!

Through Anais’ Instagram, we were made aware of this campaign and she participated in the campaign with a statement. Thank you!

Why the Activ Fitness campaign is problematic

“Headless Fatty”: In this advertisement, a “headless fatty”​1​ is symbolically represented as a Christmas ball and reduced to an object. Fat people are thus deliberately dehumanized and exposed to ridicule for the purpose of selling. The dignity of fat people is thereby violated.

Dehumanization of fat people, as here by the “Headless Fatty” and the representation as an object (Christmas ball) can cause, facilitate and/or justify mistreatment.​2​

Calling out “Get rid of the Christmas decorations / Fatties!”

The call “Get rid of the Christmas decorations” can be understood as “Get rid of the fat people”. This can be interpreted as a call for physical and psychological violence against fat people. Put any other minority in this context and you can clearly see the problem.

The French campaign “Au placard la déco de noel” (“Put the Christmas decoration into the closet”) conveys the same message and suggests that fat people should hide in the closet.

What do experts say about Activ Fitness’s campaign?

I wrote to Dr. med. Dagmar Pauli, Chief Physician for Child and Adolescent Psychiatry Psychiatric University Hospital Zurich, author of the book “Size Zero”, and asked: “What impact does this form of advertising have on young people?”

Advertisements that devalue plump body shapes belong on the garbage pile of advertising history! They cause increased self-doubt in young people and can promote depression and eating disorders.

The complete statement can be found on statements by experts.

“Don’t take it personally, they only mean the belly.”

Our fat rolls, however unsightly they might be in our culture, are part of our body and therefore part of our identity. We fat people have a head, heart and mind!

Dignity is anchored as a fundamental right in the Swiss Federal Constitution and applies to ALL!

Activ Fitness relies entirely on paid ads: In all social media channels you are confronted with advertising. Big posters hang in the city and at train stations. At the train station, the advertising can also be seen as animation on huge screens. In Geneva, the advertising is in the tram. Flyers were also distributed to passers-by as the icing on the cake.

Depending on where you live, it is absolutely impossible to escape this campaign!

In the words of APG|SGA Rail AG and SBB: “A poster is a strong and effective medium. It cannot be switched off, overlooked or overheard, but guarantees a nationwide presence in outdoor advertising […]”.

That poster is a repeated assault. It’s someone yelling continuously that I have no right to love myself, no right to go out, no right to exist, all because I’m fat. It’s violence. It’s spitting in my face.

Why we as a society must resist such campaigns

The campaigns stir up body hate as a motivation for fitness club membership. This is unacceptable.

Activ Fitness has a responsibility to the public, especially to the youth. Sport is for ALL people, regardless of weight. Excluding fat people while at the same time using them to advertise is not only disrespectful but also harmful. Profit must not be more important than the mental health of the population.

Weight stigmatization, poor body image and eating disorders have increased in recent years and this advertising promotes self-stigmatization of fat people and the fear of becoming fat, which can lead to all kinds of harmful behavior.

International studies show that being fat is the most common reason for teasing and bullying among young people.​3​

This poster gives a voice to my eating disorder.
This poster is an insult to my mental health.

Leave us fatties in peace.

On January 22, 2020 Activ Fitness and ZürcherMarketing received a letter from us. The letters were sent by e-mail to the PR management of the Genossenschaft Migros Zürich and APG|SGA Rail AG, which is responsible for Swiss railway station advertising.

We demand a public apology from Activ Fitness, as well as the promise never to use this campaign or any advertising that conveys this kind of message again.

We expect APG|SGA Rail AG and SBB to protect railway customers from discriminatory and derogatory advertising in the future!

I see that poster, everywhere, all the time. At the train station, walking around town, on Spotify, on YouTube, it’s imposing itself on me no matter what I do. Yet, I wish I could avoid it, it itches, and it makes my skin crawl, as if thousands of little insects were swarming on it. It makes me want to tear my skin off, to be out of my body.

That’s how I feel when I see it in the city, at the station, on my phone or computer.

On January 23 we received a reply by e-mail from the Genossenschaft Migros Zürich on behalf of Activ Fitness. Migros / Activ Fitness does not want to respond to our demands.

On Friday January 24, our criticism was picked up by the Swiss online magazine persoenlich.com.

On behalf of its subsidiary ACTIV FITNESS, Migros expressed its lack of understanding for the action. The poster motive is a proposed solution for the Christmas pounds with “a wink”.

The devaluation and ridiculing of the fat body as motivation? That sounds like a bad version of “the end justifies the means” and the idea represented in the hate networks that #Fatshaming is needed to get fat people excited about sports.

In any case, this reaction does not reveal any of the values with which both companies advertise themselves: neither the respect promised in the mission statement of the fitness chain, nor the claim that “the focus is not on profit, but on people” of Migros.
Both would require #weightinclusive offers and #bodyrespect towards customers.

How you can help 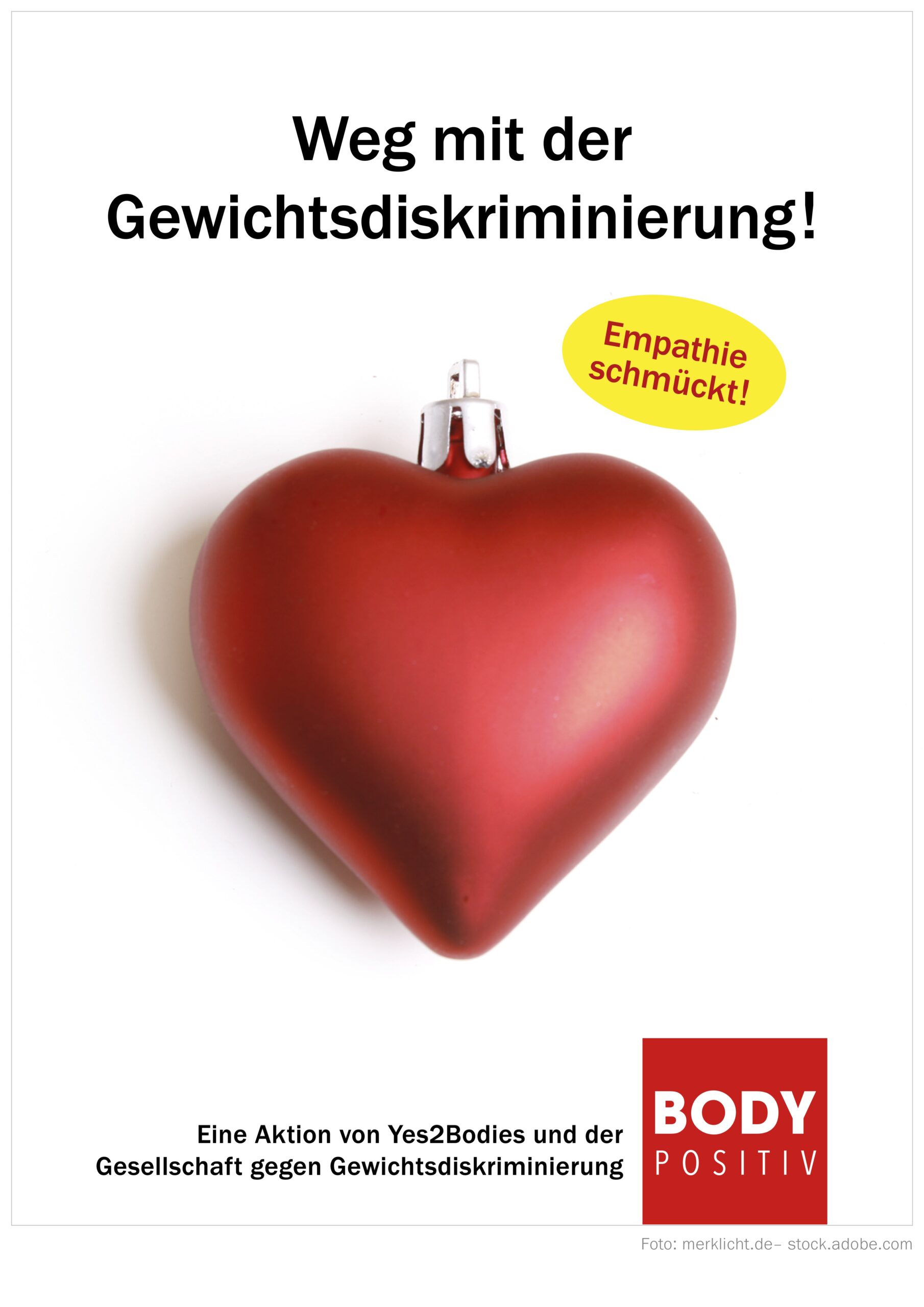 Support the people around you. Especially the fat people, friends with a history or current eating disorder and all people who are dissatisfied with their bodies.

Write your own letter to Activ Fitness.

Give feedback to Activ Fitness (anonymously, if you feel more comfortable with it) Fight against all forms of discrimination and body shaming. Thanks!

As trainers and coaches, the topic of health is certainly very close to your heart. This obliges you to promote health and not to cause any harm. With this campaign exactly the opposite happens. Weight discrimination and body hate triggers a whole chain of stress reactions in the body, with many negative consequences for the physical and mental health of passers-by and your customers. Hating fat people thin does not work.

Please stand up for a climate of respect – in the gym and on the street!

For you, if you suffer from this campaign

We see the great pain, shame and anger this campaign is causing. You are not alone. You are valuable and important, just as you are!

Please, talk about this with your friends or contact a professional and ask for help.

Organize spaces that are free of diet talk and negative body talk.

Do you want to help fight for Body Respect and against Body Shaming? Sign up for the newsletter and be there at the next Yes2Bodies event.

You’d like to rant and share your opinion? You’re very welcome to do that in the comments.

We use cookies to ensure that we give you the best experience on our website. If you continue to use this site we will assume that you are happy with it.Ok